11m or 18m: What is The Current Guidance For Fire Regulations? 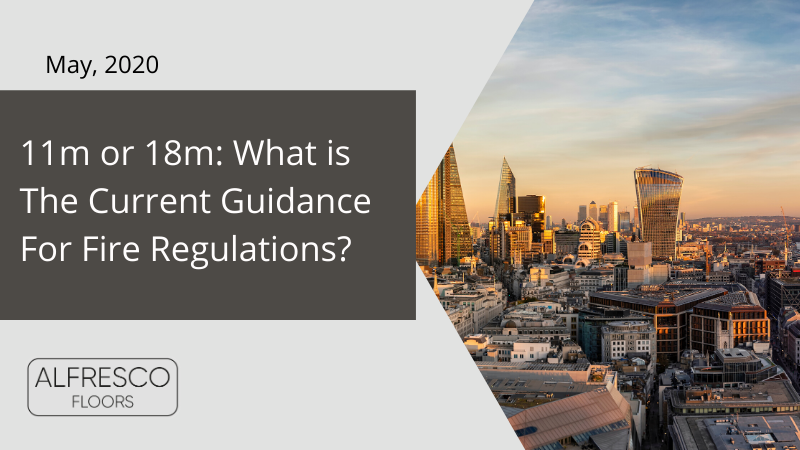 28 May 11m or 18m: What is The Current Guidance For Fire Regulations?

In the years following the tragedy at Grenfell, and more recently, the student accommodation fire in Bolton, there has been much speculation as to whether the government will lower the combustible material ban from 18 to 11 metres.

Since April 2020, some light has been shed on this issue, which we will aim to cover in this week’s blog.

This was brought about alongside a raft of announcements on fire safety earlier on this year, as part of the creation of a whole new system of fire safety regulation. Housing Secretary, Robert Jenrick, said the new regime will apply to all buildings of six storeys or more, even when they are below 18m in height.

Therefore, the new regime sets to retain that threshold, but also include any other buildings of six storeys or more which are less than 18m tall. Interestingly, it has been said that the regime would “in due course, extend to include other premises, based on emerging risk evidence.”

From May 2020, the Ministry of Housing, Communities and Local Government will now ensure sprinkler installations in all residential buildings above 11m in height. As well as this, there is now a call for improved and consistent signage in buildings to help residents evacuate in the event of a fire.

According to Jenrick, this new regime will put residents’ safety at its heart. It also follows the announcement of the unprecedented £1bn fund for removing unsafe cladding from high-rise buildings in the Budget.”

Jenrick revealed – in an update to the House of Commons – that the student housing block fire in Bolton back in November 2019 was technically excluded from the current fire regulations as the building was 17.8 metres high. This, according to Jenrick, shone a spotlight on the arbitrary nature of the 18 metre threshold.

Following a review of the original ban on combustible materials, stakeholders suggested that 11 metres is an accepted limit of traditional external fire-fighting techniques.

The 11 metre threshold is currently used in Scotland, despite there being no comprehensive research that supports the fire-fighting limit.

It appears that much focus has been placed on the fire safety of residential buildings. This is understandable considering the recent tragedies that have resulted in such an in-depth (and much needed) review.

However, not much has been said about lowering the threshold from 18 metres to 11 metres for non-residential buildings.

With Alfresco Floors’ extensive range of Class A rated external flooring solutions, you can be confident that your project is fully-compliant, providing ultimate safety to those living, working and socializing.

Our latest product, the A-PED™ pedestal system, offers A1 non-combustibility and hosts a plethora of superior design features that can be used together with our range of Class A fire-rated surface materials to create a fully non-combustible external floor.

For more information, on how we can help you with your next project, don’t hesitate to talk to an expert today.